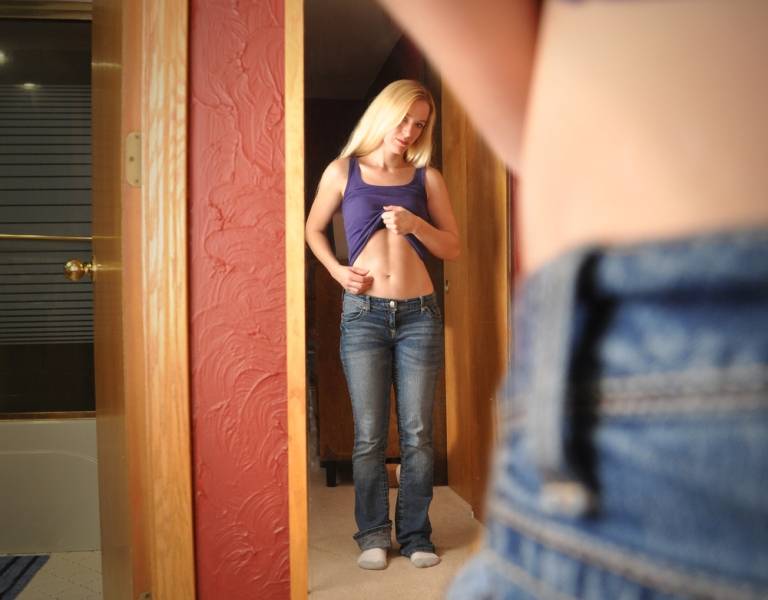 Via Steve Smith at MedicalDaily.com

Various factors go into how people perceive a person with a perfect body. As Medical Daily pointed out previously, there was a different type of “perfect body” for every time period over the past few hundred years. In the present day, where social media can lead kids to start questioning their body image as young as 8 years old, a new study has found that virtual reality can help women alter the way they think of their bodies.

The study, published in Cyberpsychology, Behavior, and Social Networking, used a body-swapping illusion in virtual reality that showed women images of themselves with skinny stomachs. Afterward, the women more accurately estimated their body size than when they had first estimated before being shown the illusion.

This body-swapping illusion in virtual reality may be able to change a person’s allocentric memory of their body. Allocentric memory is a type of spatial memory where a person is mentally manipulating objects from a stationary point of view. In this case, the women were manipulating their view of their bodies in a mirror. The researchers gathered 21 women and asked them to estimate the width and circumference of different body parts.

After giving their estimates, the women were subject to two types of body-swapping illusions. The participants wore a virtual reality headset that put them in a featureless room. When the women looked down, they saw a virtual body with a skinny belly. At the same time the women looked down, they were touched on the belly in both the real world and virtual one. To evaluate how effective their experiment was, the researchers had the women answer a 15-point questionnaire about the process. It asked how the participants experienced the illusion at the level of ownership (“I felt as if the virtual body was my body”), self-location (“I felt as if I was inside the virtual body”), and agency (“I had the feeling that I had control over the virtual body”).

The researchers found the women, after experiencing the illusion, now had a different representation of their body image. Specifically, the women reported a decreased estimated measurement from their pre-illusion estimations.

They wrote this is “the first evidence that body swapping is able to induce a change in the memory of the body.” They concluded that using virtual reality body swapping illusions could potentially help those with eating and weight disorders.

“This research provides a valuable first step in understanding of body image distortion and disturbance in those with eating disorders and obesity,” said Editor-in-Chief Dr. Brenda K. Wiederhold, of the Interactive Media Institute in San Diego, California and the Virtual Reality Medical Institute in Brussels, Belgium in a press release. “Exploring the potential of this virtual reality approach in a clinical population will be an important next step.”

Next: See how “augmented satiety” can combat obesity.

[…] It allows you to practice piloting a plane, driving a car or tank or even performing an operation. It has also been used successfully in PTSD counselling, binge eating management and body image education too. […]

[…] Next: See how body image accuracy can be improved with virtual reality. […]