SANTA BARBARA, Calif., Jan. 24, 2017 /PRNewswire-USNewswire/ — For parents who dread taking their children for a flu shot because they fear getting shots, help may be on the way.  A recent pilot study done by Sansum Clinic doctors showed that patients who viewed ocean scenes through virtual reality (VR) goggles felt less stress than those who received their shots without the high-tech glasses. 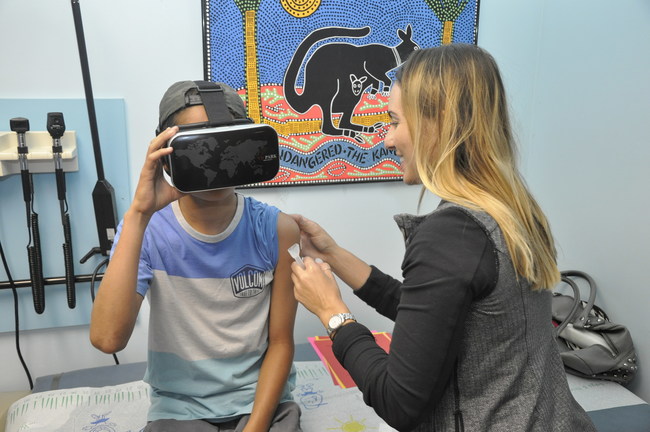 Parents, children and staff report less pain and fear when children use virtual reality headsets during vaccinations, according to a study conducted by Sansum Clinic’s Dr. Mark Silverberg

The pilot study conducted in September and November of 2016 at Sansum Clinic locations in Santa Barbara and Lompoc, CA compared children who used VR goggles during vaccination to those who received their vaccine in the traditional fashion.   112 of 244 children used Turbot 3D virtual reality goggles when receiving their seasonal flu shot. Those using the VR goggles reported 48% less pain than those without them.  Surveyed parents whose children used the VR goggles during the vaccinations noted their sons or daughters experienced 48% less pain and 52% less fear.  Sansum Clinic staff reported that children who used the VR goggles had 75% less pain, and exhibited 71% less fear. “We were fairly impressed with the numbers.  They definitely show that the VR goggles facilitated the vaccination process for kids, parents and staff,” said Dr. Mark Silverberg, Sansum Clinic pediatric ophthalmologist. A study recently published by the American Academy of Pediatrics examined the reasons for vaccine delays and found that 3/4 of surveyed doctors said parents postponed shots over concerns about discomfort.  The consequences of putting off shots are serious, according to Dr. Silverberg. “It’s a shame to think of kids going unvaccinated simply because of the stress.  We were looking for a simple, inexpensive remedy,” explains Dr. Silverberg.  The physician and father of 3, who has been recognized repeatedly by Castle Connelly as one of America’s Top Doctors, will present the results of the pilot project at the World Summit of Pediatrics in Rome in June of 2017.

The genesis of the practice enhancement project occurred when Dr. Silverberg noticed frequent apprehension in young patients who connected visiting any medical office with painful shots.  All too often he would be asked by a crying toddler, “Am I getting a shot today?”  He discussed the problem with his 15 year-old daughter, Zoe who suggested the use of virtual reality goggles as a possible solution. The father-daughter team brought their idea to Dr. John LaPuma, a board certified internist and proponent of exercising in nature for stress reduction.  The three endeavored the pilot project together.

About Sansum Clinic
Since its founding in 1921, Sansum Clinic has been improving the overall health of our patients by providing the latest innovations in equipment, technology, procedures and treatments. Sansum Clinic is the largest independent non-profit healthcare organization between the Los Angeles Basin and the San Francisco Bay Area. With more than 180 affiliated physicians, Sansum Clinic provides the full spectrum of healthcare services, from primary care to more than 30 specialties. Sansum Clinic serves more than 150,000 patients (600,000 visits) annually at our 23 patient care facilities in south Santa Barbara County. To learn more, please visit www.sansumclinic.org.